which designs the new era of creating personal creditworthiness

Globalway, Inc. is a listed company on the Tokyo Stock Exchange (3936.T, Headquarters in Minato-ku Tokyo, CEO Masato Kakamu) which operates TimeTicket, the service of selling one’s own free time and talents, is with great pleasure to announce that we have made decision to apply for Initial Coin Offering (ICO) in Switzerland.

Market size of the sharing economy that can be shared by buying and selling unutilized assets is rapidly growing. In the so-called gig economy, there are some people who earn income without belonging to companies, and some people have taken second job while they are employed. According to a survey conducted by the McKinsey Global Institute in 2015, the gig economy is forecasted to expand to $2.7trillion by 2025.

Billions of people working in the world as influencers, creators, freelancers, having multiple jobs or second job, or people who wants work on what they love or good at are exploring ways to generate income while using their time as flexible as possible. However, many people are unable to neither reach their dreams nor achieve their desirable work styles.

We decided to develop the token, TimeCoin that quantitatively evaluate the value of personal time aiming to implement the new way of working, and decentralized platform based on blockchain.
Thereafter, third parties will be able to create applications on decentralized TimeCoin Platform that individuals can increase the choice of providing services that will generate monetary compensation and feel satisfaction. We intend time sharing economy to become a common way of working, which is more efficient and most favorable.

Following two functions will be implemented on the platform of TimeCoin after the ICO.
①TimeTicket users will be able to receive TimeCoin allocated according to transaction-based
personal credit score and performance evaluation on each service.
②TimeCoin owners can issue their own original coin, and TimeTicket users can trade the individual
time at the market price. Furthermore the original coin can be traded among individuals. 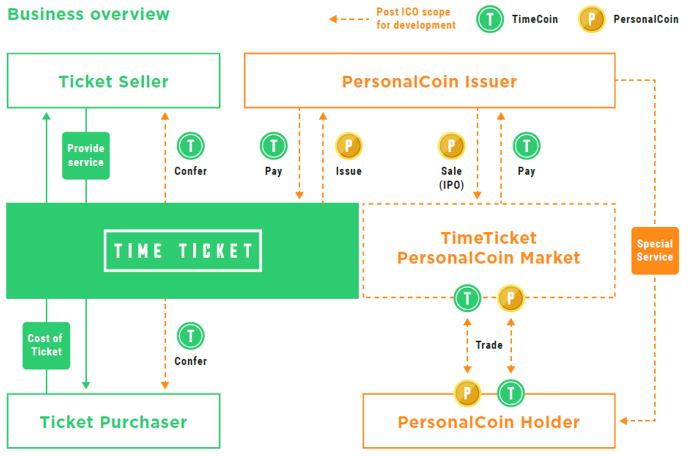 【Privilege Service, Special Offer】
For Example
・An influencer invites fans to an event
・A writer shares pre-published work before the release with fans
・A scientist invites fans to a seminar
・A personal trainer provides fans with an exercise program and individualized support

Globalway, Inc. decided to apply for ICO to FINMA to develop TimeCoin and TimeCoin Platform function. In addition, TimeTicket with new functions are planned to be deployed in Southeast Asia and South Asian countries such as India, Indonesia and Myanmar. This ICO will be conducted by a newly established Swiss subsidiary. Currently we plan to sell TimeCoin only to non-Japanese residents.
Globalway, Inc. has also begun the registration processes to become a registered virtual currency exchange service provider, so that in the future Japanese residents also be able to purchase TimeCoin in Japan through the domestic cryptocurrency exchange.

TimeTicket enables individuals to buy and sell available time in units of 30 minutes. The current number
of users is approximately 110,000, and more than 30,000 types of tickets such as portrait photography, love consultant, career counseling have been sold. In the most recent year, trading value has increased more than 10 times and it keeps growing.
TimeTicket URL: https://www.timeticket.jp